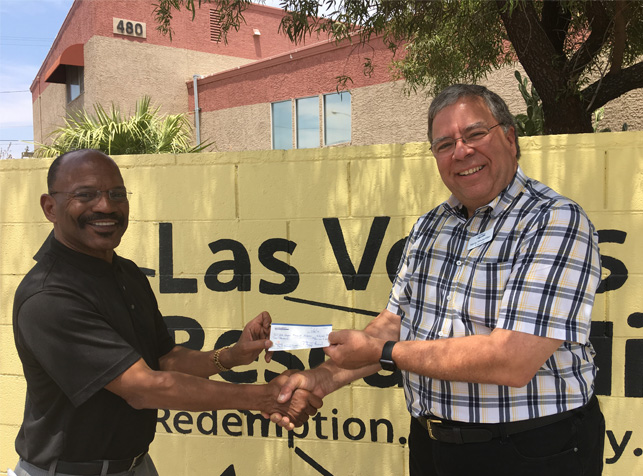 Playing His Best Hand in Vegas.

Playing His Best Hand in Vegas.

Not all readers may know Tony March is an avid, and excellent, poker player. He loves the strategy, the thrill of the win, and then handing it all over to charity.Tony was in Las Vegas recently for the 2017 World Series of Poker Main Event tournament. It’s a 7-week event that has the best poker players from around the world vying for an unbelievable $8 million prize for 1st place in the main event.

While most participants hit the strip and enjoyed the bright lights and big city, you can guess where Tony was. That’s right, he enjoyed days at the Las Vegas Rescue Mission (LVRM).

It’s a huge homeless shelter that includes the Shelter of Hope (for women and children), the Men’s Facility (which includes a separate section for single fathers with kids), a training facility, chapel and thrift store. In 2017, the LVRM provided more than 350,000 meals.

But there are hundreds of other people down on their luck who can’t abide by the rules and regulations of the LVRM. By choice or circumstance, they live in a tent city, where survival is an everyday grind.

“It was so hot. The temperature hit 115 degrees every single day,” Tony says. He spent a day in a rented car handing out water and socks to those on the street. “It’s a painful thing to consider, but in a city where hundreds of millions of dollars are spent everyday...how can there be so many homeless people?”

Unfortunately, Tony took ill and was unable to play the main event. But forgoing his chance at big winnings didn’t deter him from making a difference. He donated his $10,000 fee into the main event, to the Las Vegas Rescue Mission before leaving the city.