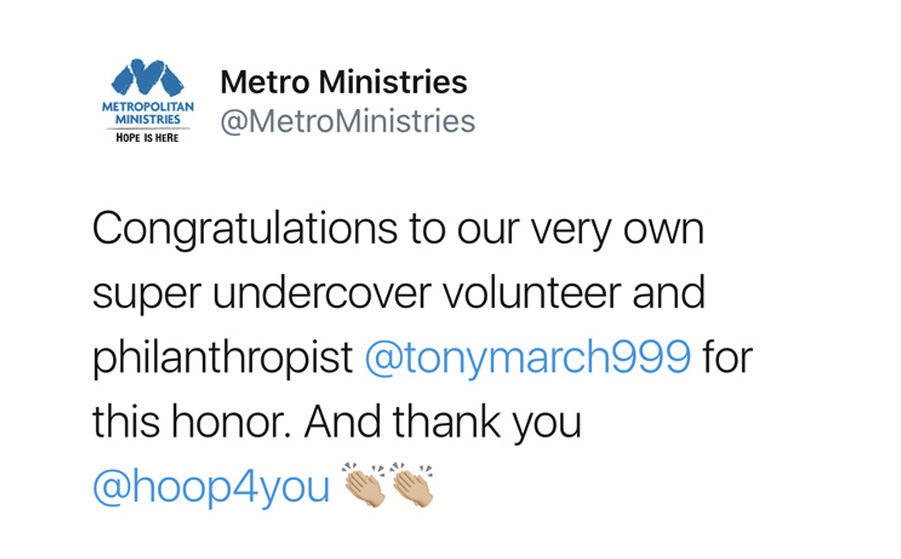 Call Him the
Undercover Philanthropist.

Call Him the Undercover Philanthropist

Tony woke up on the first day of 2018 to find himself called one of Tampa’s most intriguing people by the Tampa Bay Times for 2017.

Columnist Ernest Hooper wrote, “Call him the undercover philanthropist. The 66-year-old March spent 20 hours a week volunteering at Metropolitan Ministries as a dishwasher, never revealing to the rank and file that he heads a car dealership empire that earned $672 million last year. Or that he’s a winning professional poker player who has won—and given away—large jackpots. March draws his inspiration from a hardscrabble upbringing, and in the process he inspires all of us.”

Over the last few years, Tony has slowly begun to reveal the extent of his philanthropy. “I’m a private person and it was easier when I just showed up and volunteered and wrote checks,” Tony says. “But I’ve come to realize I need to speak out. I want people like me to see the difference they could make. And the satisfaction I get! It makes me feel good.” Part of this change of heart was Tony’s recent birthday.

“A lot of people my age are thinking retirement, but I like this second career as a philanthropist,” Tony says. “I’ve reached the top of the mountain with my success, and now I get to go back down and help others in their own journeys to the peak. I am blessed.”