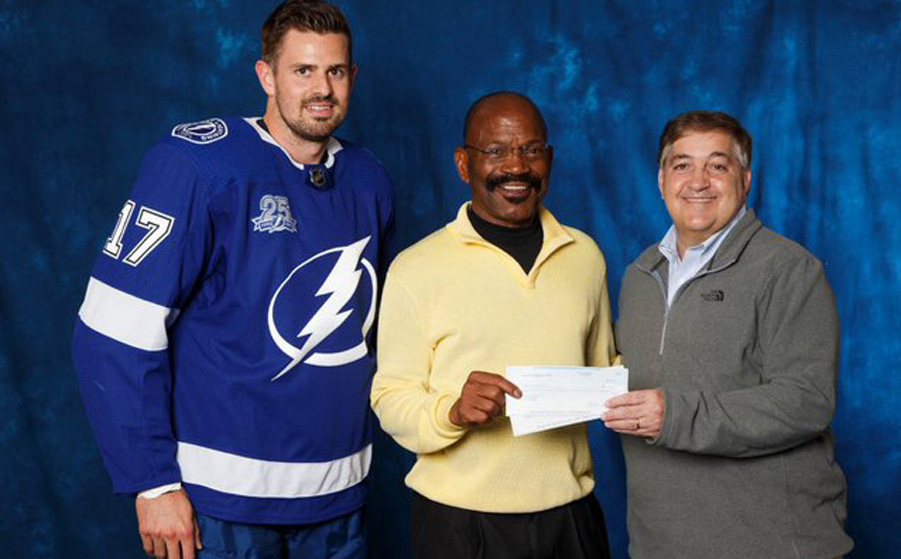 Lightning Strikes for Tony
and His Favorite Charities.

Lightning Strikes for Tony and His Favorite Charities.

Tony was celebrated yesterday by the Tampa Bay Lightning NHL hockey team with one of its coveted Community Hero Award.

It’s awarded annually to people who are making Tampa a better place to live.

“When you feed the hungry, you don’t just give them a meal, you give them hope,” said Lightning left wing Alex Killorn in a video that played on the Lightning Vision Scoreboard before the ceremony. “For the last decade, Tony has been the face of hope for poor and homeless families... Beyond the kitchen, Tony has volunteered more than 9,000 hours in the last 9 years to help homeless people in need. What Tony does isn’t easy, it’s right, and that’s why Tony is a hero.”

As part of the celebration, Tony had the chance to tour the Amalie Arena, with stops in the dressing room and the players’ bench. He was given the use of box seats for the game and cheered on the Lightning with friends and family.

“We had a lot of fun,”  Tony says. “The atmosphere was electric and it was a great game.”

But Tony will tell you the best part was receiving a $50,000 grant to be given to the charities of his choice. After the ceremony, he delivered $40,000 to Metropolitan Ministries and $10,000 to his friends at Abe Brown Ministries, which provides transition housing and education for people recently released from prison.

“The recognition is always humbling, but I’m just happy to get that money in here to make a difference,” Tony says. “And now I’ve got to get into the kitchen to prepare some food!”